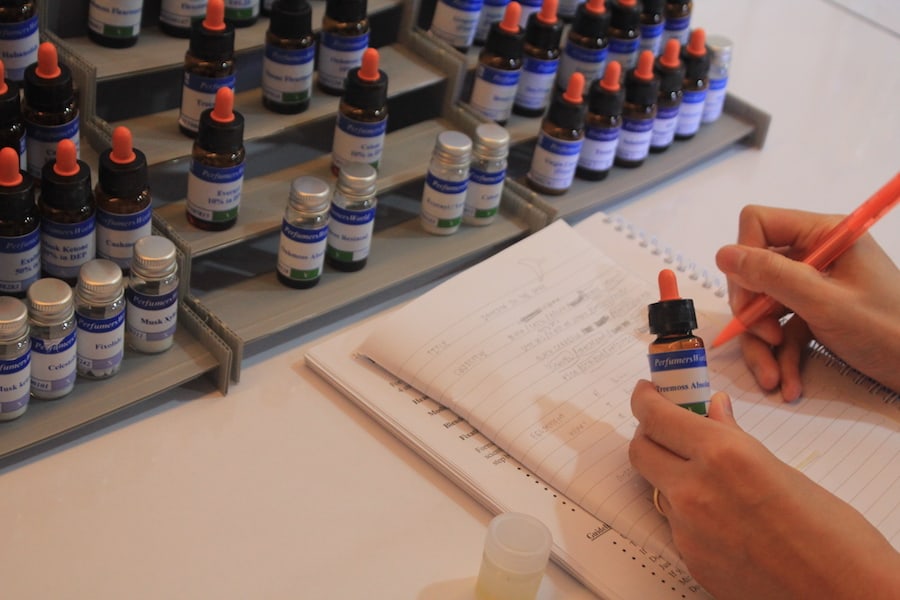 From our friends at PerfumersWorld:

One of the most mysterious and misunderstood of all our senses, smell links us to a world of pleasure as well as warning of danger and helping us to identify everything from potential mates to foods we should probably avoid.

But while just about everything has a smell, we rarely have the words to describe them without borrowing from the other senses (how, exactly, do you describe the smell of watermelon?) or the awareness to notice the effect they have on our mood. That is about to change with a PerfumersWorld workshop being held in New York City from May 11 to 15.

Focusing on perfume creation, spa and lifestyle products, commercial perfumery, natural perfumery and aromatherapy, The Art and Technology of Perfumery Foundation Plus Workshop offers participants a deeper understanding of the cultural and historical significance of our sense of smell, while providing some of the practical skills necessary to start working as a creative perfumer, aromatherapist, evaluator or marketing specialist in five short days.

“I knew absolutely nothing about how perfume was made or the typical ingredients and notes that go into it,” said Aleksei Moskin after attending the one-week primer held in Bangkok earlier this year. “What Stephen Dowthwaite showed me is that like many other industries that surround themselves in mystery, once you pierce the veil of secrecy and learn the terminology, just about anyone can become a perfumer with a bit of determination and vision.”

Landing in New York a week before perfume lovers arrive in the big apple for Sniffapalooza — the fragrance equivalent of a rock festival that focuses on olfactory rather than aural pleasure — the workshop runs from May 11 to 15 and promises to change perceptions and foster innovation.

“I work in sales and marketing,” said a past participant whose non-disclosure agreement with an employer prevented her being identified. “In my line of work I need to be able to talk to people about the fragrances they wear and understand the deep emotional connection they have to them. The course not only provided me with the tools to do that but also gave me a deeper respect and admiration for perfumery as an artform.”

Taking participants from neophytes to budding perfumers in a few short days, the course was designed by Stephen V. Dowthwaite, a perfumer with over 40 years experience and owner of PerfumersWorld, a successful fragrance manufacturer and raw materials supplier located in Southeast Asia. Previously held in places as far-flung as Thailand, the UK and New Zealand, this is the fourth time the workshop is being held in New York. The course has attracted thousands of participants over the years with its mix of theory, practice and a Zen-like approach to the nature of creativity.

Lest it be thought that the course is only for complete beginners, numerous industry insiders and professionals from companies like IFF, Givaudan, Symrise, Aveda, Colgate Palmolive, Unilever, Firmenich and Penhaligon’s, have all been found sitting alongside journalists from The New York Times and Perfumer and Flavorist magazine and up-and-coming perfumers at the courses, sharing their own experience while gaining a fresh perspective on the tricks of the trade that are part and parcel of the craft.

“No matter what your level of understanding or your reason for attending one of these workshops,” said Dowthwaite, “you will grow exponentially. I have seen people who have been in the industry for 30 years discover something that has eluded them their entire careers just as often as I have seen someone who had no previous knowledge of organic chemistry create a perfume that they have then taken to market. It is both humbling and rewarding for everyone involved.”

To sign up and receive a 10% discount on course registration, go to http://www.perfumersworld.com/product/WSNY1505.html and enter Sniffapalooza Exclusive in the message field on the deposit page.